Hugh Knight
San Bernardino, CA, United States
I have been involved in the study of medieval German martial arts for more than twenty-five years, and am the founder and head instructor of a school called die Schlachtschule (The School of Battle) 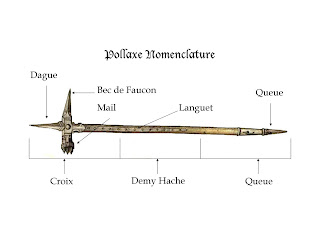 Sydney Anglo, one of the most respected scholars working in the field, writes:
"With few exceptions, narratives of axe fighting date from the middle decades of the fifteenth century and are Burgundian in origin; and, of these, the only chronicler who made a serious attempt at accurate and detailed reporting is Olivier de la Marche. Yet even he uses a wide range of terms for the various parts of the pollaxe which he usually designates by the word hache, through he sometimes prefers baton. On one occasion only, when describing the encounter between Jacques de Lalain and an English knight in 1448, does Oliver specify a taillant, that is an axe head with a cutting edge: and it is, I think, significant that another account of the same combat similarly makes special reference to this feature. Olivier frequently mentions the use of the hammer-head (maillet or mail)..." (Anglo, S., Le Jeu de la Hache: A Fifteenth-Century Treatise On The Technique Of Chivalric Axe Combat, Archeologia, CIX, 1991, p. 3)

“Poll” is an archaic English word meaning head; the modern term “polling” (as in political polls) derives from it because polls are like head counts on a particular issue. Thus, a pollaxe is a headed weapon, meaning a staff weapon with a head on it. A halberd is another kind of poll arm, or headed staff. Because people forget what poll means they assume it is an archaic spelling for “pole” since all of these weapons are mounted on a sort of pole. (It is sad how changes in language use are so often touted as being positive things when they are so commonly based on complete ignorance and an unwillingness to do research.)

While the French and Germans did not typically use the "poll" (it is an English word, after all) they still referred to all these variants as axes. This picture:
http://mdz10.bib-bvb.de/~db/0002/bsb00020451/images/index.html?seite=83
shows pollaxes, and we know they were considered axes because Talhoffer's text says: "Der erste anbinden mit der axt" or "the first bind with the axe."

Here's another example from the Paulus Kal Fechtbuch:
http://daten.digitale-sammlungen.de/~db/bsb00001840/images/index.html?seite=81
with exactly the same text as the Talhoffer plate above, except he spells the word as "axe" (those medieval Germans weren't really careful about spelling).

As you can see, in both of those examples the axes in question are pollaxes with a hammer on one side and a spike on the other. Even more interestingly, almost all medieval fighting books that show pollaxes show the hammer and spike version (an exception is the very strange Codex 11093) and all refer to them as axes in spite of having nothing we modern people would recognize as an axe blade. Some German authors occasionally refer to pollaxes as "Streitaxt" (battle axe) or "Mordaxt" (death axe), but those terms are rare; most of the time they simply call them axes.

In Le Jeu de Le Hache (Fr: "The Play of the Axe") the term used is simply "hache," which is French for "axe," and yet the descriptions in the text make it absolutely and unquestionably true that the axe being described is just the same as the ones shown in the German sources: a hammer and a spike.

Unfortunately, no extant German source gives us a good set of terms for the various parts of the axe, so we turn primarily to Le Jeu for that. The hammer is called a "mail"; when there's a blade on the axe it is called a "taillent" (although this is never the case in Le Jeu); the spike on the back of the mail is called the "bec de faucon" or falcon's beak; the spike on top is called a "dague"; the "croix" refers to the cross formed by the head of the axe and the shaft; the smaller cross formed by the two small bolts often used to hold the head on the weapon are sometimes referred to as the "croisee." When there is a spike on the bottom end of the shaft it is called a “queue” and the metal strips that sometimes reinforce the sides of the shaft are called “languets” (although these are never mentioned in Le Jeu).

Some of these terms play a double role as well. The author of Le Jeu intended the weapon to be used more or less in thirds (one third above the right hand, one third between the hands and one third below the left hand) and he uses the term croix for the entire third of the weapon above your right hand and the word queue for the entire portion of the shaft below your left hand. The portion of the shaft between your hands is called the “demy hache.” This is important to note because it can lead to confusion if you do not understand this naming convention: I saw a video on the internet showing someone who was blocking attacks with the actual head of the axe in places where Le Jeu says to displace with the croix because he misunderstood this; what the text actually means is to displace with the shaft of the axe below the cross proper. If that was not true then displacing attacks with the tiny queue would be difficult at best!

So the terms "Bec de Corbin," "Lucerne Hammer," "polehammer," and "poleaxe" should never be used when referring to pollaxes, and all types of pollaxes, whatever the head configuration, should be called simply "pollaxes" unless you want to use the German or French terminology, of course (or you can just call them "axes," but then people will think you mean a hatchet).
Posted by Hugh Knight at 12:13 PM

Pardon my obtuseness, but what is the major difference between a pollaxe and a bec?

Bec is short for bec de faucon, and refers to the spike/hook on many pollaxes.

I understand that some people use this term to refer to pollaxes of the hammer and spike variety, but, in fact, as this essay shows, that sort of weapon was simply called an axe ("hache" in French) or pollaxe (or Streitaxt or Mordaxt in German) in period.

This is a case of modern people seeing something and just assuming there *has* to be a different name for it.

Does that answer your question?

Yes, Sir, thank you kindly. So a bec de corbin is simply a pollaxe with a modern (or possibly Victorian) name? That clears things up for me greatly! :)

Yes, that's right. Bec de Corbin means "crow's beak", and shouldn't even be applied to the pollaxe; the term used in the sources I have studied (e.g., Le Jeu de La Hache) is bec de faucon, or falcon's beak (not bec de corbin), and that's *only* used for the back spike on a pollaxe, not the whole weapon, and the weapon itself is always referred to as a "hache" in French. The German sources don't ever give names for the subsidiary parts of the pollaxe, but they refer to the weapon itself as an axe (Axt) or battle axe (Strietaxt) or death axe (Mordaxt).

By the way, that shows another misconception: A "battle axe" isn't a huge, double-bladed one-handed (or even two-handed weapon) as popular literature suggests. It's just another word for pollaxe: Streitaxt.

Perhaps you may know the answer to a question I have about axe anatomy. I have been searching the web and shops that sell them but have had no luck so far.
Some axes have a space or gap behind the blade. It is usually part of an ornamental design. The only functions I can think of might be that it would require less metal to make and that it might weigh less. It is possible that it might have an effect on the balance as well. I am wondering if this gap has a name.

I'm not sure if I understand to what you're referring. Can you give an example of a pollaxe with the feature about which you're asking?

Here is a page showing quite a few pollaxes:
http://www.myarmoury.com/feature_spot_poleaxe.html

Do you see the feature about which you're asking on any of them?

Hugh Knight, sorry if this is the inappropriate place to post this question, but I have been on a search for five years trying to find information on an axe head that was brought back from Germany during WWII. A relative of mine picked it from a german army post. It is roughly eight inches by six inches, with ornate floral engravings all along the axe. The back of the axe has the "bec de faucon" though the bec do faucon is an actual falcon's head with a curved beak. I am guessing it was made from steel, as it is oxidized black and has no other trace of metals that might have been inlay. I have searched all over online for pictures and can not find any thing. I have taken to a couple of different professors and antique weapon collectors and no one has been able to give me much on it (orgin, era, poleaxe or battle axe, etc). I did have one antique collector offer $250, then $500, but it holds senitmental value between my father and I. Any info you could give me would be a huge help. Would a knight's axe be engraved and carry this much detail or is this likely a presentation axe? Were German arms engraved like this? I had one collector tell me it might be French due to the amount of engraving, though I had another tell me definetly German based upon the craftsmenship.

Hello,
I'm sorry, but without seeing the axe in question I can't say much about it. One thing I can say is that most "fighting" axes were fairly simple weapons--sometimes decorated, but rarely heavily engraved, etc.

The kind of weapon to which you're referring is more properly described as a halberd: most sources use that term for weapons with an axe blade and a spike backing it. Many such weapons were elaborately engraved in later periods as ceremonial pieces.